DOHA (Reuters) - U.S. attacker Christian Pulisic said on Thursday he was recovering from an injury sustained scoring a crucial goal against Iran and aspired to be fit enough to face the Netherlands in Saturday's last-16 clash at the World Cup.

"I'm taking it day-by-day for now and I will do everything in my power to work with this medical team and make sure I can play," Pulisic said at the U.S. training camp, adding that his pelvic contusion was painful but improving.

"That bone is there for a reason to protect you. It was sore. But it's getting better."

The 24-year-old is the star of a young U.S. squad and his absence on Saturday would be a huge blow to their chances. But Pulisic was full of praise for the players around him.

"I'm really happy with the team spirit. To get out of the group is an unbelievable accomplishment," he said.

"It feels great to be where we're at right now, but there's still more to come."

Pulisic described his confusion after being hurt as he bundled the ball in against Iran in the United States' final group game, and then his tension as he followed the second half via a trainer's telephone while receiving treatment.

"I realise the ball went in but I was a bit confused. It didn't really feel like a celebration," he said.

Teammate Timothy Weah, who has also grabbed one goal in Qatar so far, said the United States were not underestimating the challenge against the higher-ranked Dutch despite the strong start.

"I think we all know that Netherlands is a big team, with a lot of quality players," he said, adding that he hoped his side were raising the profile of the sport in the United States where basketball, baseball and American football dominate.

"I think everyone back home is realising that their team has talent. It's up to us to take it as far as we can go and make a statement."

Pulisic, too, was hopeful about the domestic impact.

"Without the brotherhood, without this family aspect, we wouldn't be in this position so I hope that's what everyone back home can see." 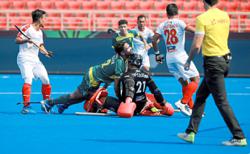