PETALING JAYA: Holiday with the family will have to wait as newly appointed national team captain Faisal Halim wants to give undivided attention to leading Malaysia to success in the Asean Football Federation (AFF) Cup.

The tournament is from Dec 20-Jan 16 and head coach Kim Pan-gon will name a 23-member squad comprising seasoned and new players.

The 24-year-old Faisal said he had no qualms accepting the call-up as he wants to do his part for the national team.

“I’ve set aside my plans to go on vacation with my family to come here (for the training camp in Petaling Jaya) to help Malaysia as much as possible,” said the former Terengganu player.

“When the coach called me and said ‘Mickey, you are wanted in the national team’, I didn’t think twice and accepted the coach’s offer.

“I told my wife, daddy wants to help Malaysia. After this, we will then go for our vacation.”

While happy with the task to lead, Faisal said the role came with huge responsibility.

“It’s not just about wearing the armband. It’s more than that, it’s about my duty to convey information from the coach to my mates in all matters.

“We should achieve something in this tournament,” said Faisal, who joins Brendan Gan, Dion Cools and Safawi Rasid to form a four-captain partnership for Harimau Malaya.

He added that Harimau Malaya have shown positive development and significant changes since coming under the charge of Pan-gon.

“We are able to stay competitive against higher ranked teams. Players are able to understand each other better. I hope the new players selected for this will be able to follow the tactics of coach Kim.

“Trust me, if everyone can give what the coach wants, this will be a good campaign.’’

Under Pan-gon, the boys qualified for the Asian Cup and finished runners-up in the King’s Cup in Chiang Mai this year.

Malaysia will play Cambodia in a Tier 1 international match at the Bukit Jalil National Stadium on Dec 9 and face the Maldives at the Kuala Lumpur Football Stadium in Cheras on Dec 14 to prepare for the AFF Cup mission.

They open their Group B campaign against Myanmar in Yangon on Dec 21. It will be followed by matches against Laos in Kuala Lumpur (Dec 24), Vietnam in Hanoi (Dec 27) and Singapore in Kuala Lumpur (Jan 3). 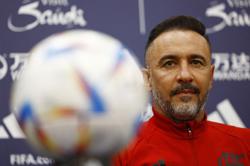