DOHA (Reuters) - Brazil earned a hard-fought 1-0 victory against Switzerland on Monday to progress to the knockout stage of the World Cup - and appear to have found a new talisman in Vinicius Jr in their quest for a sixth champions title.

The 22-year-old Real Madrid prodigy was the best player on the pitch. He created most of Brazil's chances and drew the attention of three Swiss defenders in the build-up to the winner, leaving Casemiro wide open in the box to score.

It was a tough and compelling match against a strong and organised Switzerland team who did not make it easy for Brazil and frustrated them in a goalless first half.

Coach Tite had struggled to find the best way to replace his star player Neymar, who has been ruled out of the group stage by an ankle injury suffered in Brazil's opening 2-0 win over Serbia.

After daring to abandon his traditionally defensive approach to unleash so much attacking talent in the first match against Serbia, he took a step back on Monday and went for power over finesse, choosing to pair Fred with his Manchester United team mate Casemiro to strengthen the midfield.

He tried to push Paqueta forward into a playmaking role but the desired result failed to materialise, with a team that was clueless on how to deliver the ball to their wingers' feet.

Tite quickly realised that replacing a talented and jet-heeled player like Neymar with two slow midfielders was not the way and brought in flamboyant Real Madrid forward Rodrygo from the bench after the break. Brazil finally looked like the aggressive side who captivated the world against Serbia.

With his mate Rodrygo close up-front, it was time for Vinicius Jr to show why he is one of world's top rising stars, beating pairs of defenders like they were nothing and putting all the stadium on their feet every time he touched the ball.

The 22-year-old scored Real Madrid's winner in the Champions League final against Liverpool, and finished eighth in the Ballon D'Or ballot last month, elevating him to world-class level in his fifth season with the Spanish giants.

He shares many similarities with the young Neymar. He plays in the same position his idol occupied at Santos and Barcelona, and drives the attention of his rivals like only those with that inexplicable gift, the it-factor, can do.

Vini can sometimes be a little chaotic and over the top, and make silly mistakes due to a lack of attention and rushing decisions. But he is always dangerous, a difference-maker that every team dreams of having.

Tite should rely on Vinicius going forward and keep the aggressive mentality when making his team selection. He has an outstanding new generation of talent up-front and after two games it is clear that is Brazil biggest strength in their quest for the record-extending sixth title. 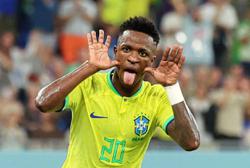