AL RAYYAN, Qatar (Reuters) - Morocco head coach Walid Regragui has warned the Belgian-born players in his squad to stay focused when they face Roberto Martinez's men in the World Cup on Sunday, saying they risk costly mistakes if they get emotional on a "special" occasion.

Morocco, ranked 22nd in the world, have four Belgian-born players in their squad: Midfielder Selim Amallah and forward Ilias Chair were born there, while midfielder Bilal El Khannouss and winger Anass Zaroury both played for Belgium at the youth level before switching sides to Morocco.

"For any dual national .. they have a special emotion and that's a positive energy and you have to draw on that," Regragui told reporters on Saturday.

"But it is a match that we need to win (irrespective) of who we are playing. We have to focus on that.

"We know that this is a special match for them, but we have to put that into context. You cannot get too emotional because that could lead you to make mistakes. And that could be very expensive for us."

Regragui, who took over Morocco in September after Vahid Halilhodzic was fired, said the team were eager to pull off a surprise against giants Belgium as they look to come out of Group F, which he described as "the group of death".

Morocco are tied with Croatia on one point, with Belgium the leaders on three points and Canada bottom with zero.

"Belgium are favourites, they have outstanding players and an excellent coach... They have great players even on the bench. They have experience... it will be a tough game," the 47-year-old coach said.

Regragui said the goalless draw with Croatia would help them play in a relaxed mood against Belgium and that they would not fear taking risks.

"We can give Belgium problems in midfield and technically we need to be much better... we need to keep possession and create chances, and if we do that we will keep Belgium under pressure."

But Regragui has to deal with fitness issues, with defender Noussair Mazraoui a doubt after being stretchered off in the game against Croatia with a hip injury.

"He is out for now but hopefully he will back for tomorrow," Regragui said. "Mazraoui and Achraf (Hakimi) and other players including the captain (Roman Saiss) have some fitness issues but hopefully they will be back.

"We have three games in this group stage and we hope to go further than that, and we have to try to do that without taking any risks with injuries. We will decide tomorrow if we can start them but they are ready."

Morocco beat Belgium 4-1 the last time the teams met in 2008 in an international friendly. 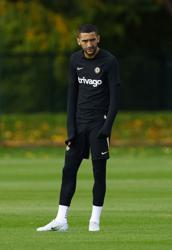