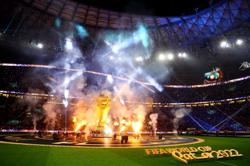 BRUSSELS (Reuters) - A last-minute decision to ban the sale of alcohol at Qatar's World Cup stadiums will seriously limit Budweiser sales in the Gulf state, but will not derail its owner's global campaign during the tournament, industry analysts said.

Soccer world governing body FIFA's announcement of the ban on Friday, just two days before the event kicks off, leaves the world's largest brewer Anheuser-Busch InBev with at least a headache.

Budweiser, the major World Cup sponsor it owns, had been set to exclusively sell alcoholic beer within the ticketed perimeter surrounding each of the eight stadiums three hours before and one hour after each game during the four-week event.

Budweiser has been a World Cup sponsor since the 1986 tournament in Mexico.

The event, held every four years, typically boosts beer consumption globally, and the Belgium-based maker of brands such as Stella Artois and Corona clearly wants to profit from the millions of dollars it has paid to be the tournament's official brewer.

The 2014 World Cup boosted AB InBev beer sales in host country Brazil - its second most profitable market after the United States - by 140 million litres, with extra drinking in usually weak winter months and an annual volume hike of more than 1 percentage point.

But Qatar 2022 was always going to be different, as the first World Cup held in a conservative Muslim country with strict controls on alcohol, the consumption of which is banned in public.

In July, reflecting on information that the stadiums' stands would be alcohol-free, AB InBev chief executive Michel Doukeris said the tournament would offer a great opportunity to showcase non-alcoholic brands, such as Budweiser Zero.

With a planning window of a few months, rather than two days, AB InBev could have sought to substitute regular Budweiser with its non-alcohol version outside stadiums and indeed might have profited more given the latter's typically higher margin.

Elaina Bailes, committee member of the London Solicitors Litigation Association, said the last-minute change of position was likely to lead to a dispute.

"Budweiser now has a costly logistical problem of what to do with distributed stock it can no longer sell, and there could be knock on effects for contracts in their supply chain," she said, adding it would also have lost brand visibility during matches.

Ed Weeks, head of commercial dispute resolution at British-based lawyers Cripps, said the big question was whether the FIFA-Budweiser contract anticipated the possibility of a sudden change.

"If they did, and they put in a clause putting the risk on Budweiser, then they're going to be very smug right now. If they didn't, then FIFA and its lawyers are going to have a really bad weekend," he said.

FIFA did not immediately respond to a request for comment on the possibility of a legal dispute.

However, addressing the issue of the reversed decision at a news conference in Qatar on Saturday, FIFA president Gianni Infantino said FIFA had failed to persuade the Qatar government to stand by the original decision to allow the sales.

"We tried and that is why I give you the late change of policy," he said. "We tried to see if it was possible."

He added that FIFA and Budweiser had been partners for decades and looked forward to being partners in the future.

"I think this particular situation has brought us even closer together." he said.

AB InBev said in a statement that "some of the planned stadium activations cannot move forward due to circumstances beyond our control", declining further comment.

Doukeris though has said that the far greater impact in terms of beer sales is from fans across the globe, many with a AB InBev beer in hand - from a Jupiler in Belgium to a Brahma in Brazil.

Indeed, the brewer has launched its biggest ever World Cup campaign in over 70 markets, more than double the number of participating countries, compared with just over 50 for the 2018 edition.

"The stadium sales themselves are a relatively small component of this," said Bernstein beverage analyst Trevor Stirling. "In terms of volumes of brands, it's about the global television audience and global activations."