PETALING JAYA: Despite playing with 10 men for the last 15 minutes, Johor Darul Ta'zim managed to hold on and secure a precious 1-0 win against Sabah in the first leg of the Malaysia Cup semi-finals at the Likas Stadium in Kota Kinabalu on Tuesday (Nov 15).

The Southern Tigers had to thank mercurial winger Arif Aiman Hanapi, who scored a long-range goal from outside the penalty box in the 33rd minute.

In the 75th minute, JDT centre-back Feroz Baharuddin was sent off for a strong challenge on Sabah winger Saddil Ramdani, but video replays showed that he got the ball cleanly.

Despite being a man down, JDT held on and will have an advantage at the Sultan Ibrahim Stadium in Iskandar Puteri on Nov 20.

JDT are aiming to win the Malaysia Cup after three years and also complete the first quadruple in Malaysian football.

They have already won the Charity Shield, FA Cup and Super League this season. 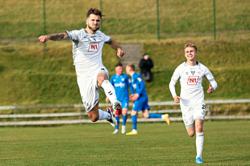