(Reuters) - Sydney United 58 have been fined A$15,000 ($9,534.00) and sanctioned by Football Australia (FA) for the behaviour of some supporters at last month's Australia Cup final, the national governing body of the sport said on Friday.

The FA promised strong action in response to the incidents, and a soccer fan who performed a Nazi salute at the game was banned for life.

Sydney United 58 was founded as Sydney Croatia in 1958. Some fans at the cup final sang songs associated with the far-right Ustase movement in Croatia in the 1930s and 1940s, while there was also chanting and booing during an indigenous Australian welcoming ceremony.

Following the match, Sydney United said they would not tolerate any form of disrespect, racism or discrimination and condemned any behaviour that did not reflect "the wider views of the club."

"Multiculturalism and inclusivity are two of the game's fundamental pillars and will continue to be a priority for our club and its supporters," the club said.

In a statement, Football Australia said it will "use the fine to further invest in education, training and materials related to anti-discrimination and cultural competency for the Australian Football community".

"In addition ... Sydney United has also been issued with several suspended sanctions.

"These include further fines, significant point deductions in the NPL NSW competition (up to 40 points deducted per sanction) and a suspended participation ban from the Australia Cup in 2023, 2024 and 2025."

FA said the suspended sanctions will be enforced if Sydney United failed to comply with requirements regarding volunteer work with minority communities, cultural competency training and implementation of cultural initiatives at the club.

"The sanctions imposed ... reflect the seriousness with which we have viewed this situation and we believe sends a clear message that this type of behaviour will not be tolerated," FA Chief Executive Officer James Johnson said.

(Reporting by Aadi Nair in Bengaluru; Editing by Kenneth Maxwell) 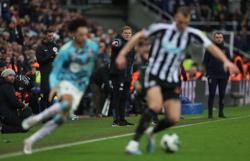