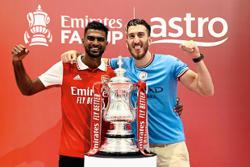 That’s mine: Kuala Lumpur’s Romel Morales (centre) vying for the ball with Al-Seeb players during the AFC Cup final match at the National Stadium in Bukit Jalil. — SHAARI CHEMAT/The Star

Kuala Lumpur’s hopes of sealing their great run in the AFC Cup went up in smoke when they lost 3-0 to favourites Al-Seeb in the final at the National Stadium in Bukit Jalil yesterday.

Both first-time finalists dished out good performances in the first-half, but it was the Omani club who took their chances well in that period.

KL got their first chance in the 18th minute when winger J. Partiban drilled in a low cross from the left but two players, Paulo Josue and Zhafri Yahya, did not anticipate it quick enough.

They could have scored their second in the 32nd minute when Daniel Ajibola’s super shot from 30m was saved by Mendoza.

KL should have equalised in the 34th minute when another cross from Partiban was not made full use of by Zhafri, whose shot was saved by Al-Seeb goalkeeper Ahmad Faraj Al-Rawahi.

In the second-half, Partiban had a good chance in the 49th minute when he beat a defender with a stepover and unleashed an audacious shot which went wide.

At times, KL resorted to route one football, but it wasn’t good enough to break down Al-Seeb, who focused on game management to wind down the clock.

Partiban continued to torment defenders on the left but his crosses were squandered, especially in the 59th minute when Josue scuffed a shot.

Al-Seeb killed the game in the 68th minute when Muhsen Saleh Al-Ghassani unleashed a superb shot to beat Mendoza.

KL could have reduced the deficit in the 72nd minute when substitute Hadin Azman’s deft free-kick found striker Romel Morales but Al-Rawahi saved his header.

Al-Seeb held on to win 3-0 and etched themselves in the history books by being the first Omani club to win the tournament.

KL, however, can be proud of their outing as no one fancied them to get past the group stages but they went on to upstage top sides like Sogdiana (Uzbekistan), Viettel (Vietnam) and ATK Mohun Bagan (India) to get to the final.