Soccer-Arsenal ease to 3-0 win over Bodo/Glimt

LONDON (Reuters) - Arsenal cruised to a 3-0 home win over Norwegian side Bodo/Glimt in the Europa League on Thursday to move clear at the top in Group A.

Arsenal dominated in the first half at the Emirates, pushing the Norwegian champions onto the defensive and forcing them into mistakes.

The Premier League side took the lead game after 23 minutes when Kieran Tierney's shot from the left rebounded off the post back into the box, where Eddie Nketiah tapped it in.

Glimt had more of the game in the second half, creating half-chances with Amahl Pellegrino seeing his low shot superbly saved by keeper Matt Turner in the 57th minute.

Vieira wrapped up the win for Arsenal in the 84th minute after Gabriel Jesus dribbled past two Glimt defenders.

Real Betis beat AS Roma 2-1 away thanks to Luiz Henrique's 88th-minute winner to maintain their 100 percent record in Group C.

Michy Batshuayi was on target as Fenerbahce beat AEK Larnaca in Group B, with the Belgian opening the scoring in the 26th minute, while Dynamo Kyiv were beaten 2-1 by Stade Rennais to remain without a point after three games.

Union Saint-Gilloise's Gustaf Nilsson scored in the 86th and 94th minutes as they fought back to beat Portuguese side Braga 2-1 away in Group D.

Feyenoord were held to a 2-2 draw by Midtjylland after the Danish side fought back from 2-0 down in Group F.

In Group G, leaders Freiburg grabbed a 2-0 win at home against Nantes thanks to goals from Daniel-Kofi Kyereh and Vincenzo Grifo while Qarabag beat Olympiakos 3-0 win away. 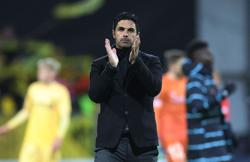