Soccer-James can be a Chelsea legend says coach Potter LONDON (Reuters) - New Chelsea coach Graham Potter was the latest to rave about Reece James after the wingback capped a man-of-the-match performance by scoring a superb final goal in Wednesday's 3-0 Champions League victory over AC Milan.

Defensively, James responded superbly to eventually suppress the early muscular threat of Rafael Leao and then found himself advancing into space to become a constant danger.

It was his cross that Pierre-Emerick Aubameyang turned in for the key second goal early in the second half and he then thundered in the third after yet another overlapping run down the right.

"He's just a fantastic player and a young player developing all the time who will get better and better," Potter said of the man who topped the "involvement" chart with 99 touches.

"I've really enjoyed working with him. He’s just tremendous and my job is to try to help him reach his potential. We love him, he's so important for us. He could be a Chelsea legend, but for that to happen he has to be part of a successful team."

Former Chelsea midfielder Joe Cole said: "Reece James was sublime all night. There are not enough superlatives for him."

Potter said his team had put on a very good overall performance. "Apart from the end of the first half, they didn’t have many chances and that says a lot about how we defended as a unit," he said.

"The boys have been really open, responsible, honest and fantastic to work with. They knew their level had dropped a bit and so that's great from a coach’s perspective."

After taking one point from their first two games, Wednesday's victory puts Chelsea back in the mix in a congested group and they will need to back it up in the return in Italy next week.

"It was an important win but there's still a long way to go in the competition," Potter said. "We’re looking forward to going to the San Siro. The away support here were very loud tonight and its going to be a huge challenge for us."

One man particularly looking forward to it is Aubameyang, who spent the first part of his career there without ever making the Milan first team.

The well-travelled striker said that he was enjoying himself at his latest club after arriving from Barcelona this season. "I'm feeling good. I was very welcomed by all the players and staff," he said.

"It was a bit strange to play against them after a lot of years but that’s football," he added after spending three years at the Italian club."

The only piece of bad news for Potter was an injury to opening goalscorer Wesley Fofana that will require a scan on Thursday. "We’re concerned and we just have to hope for the best," he said."

Milan coach Stefano Pioli cut an animated figure all night on the touchline but his desperation failed to get through to his players, who managed only one tame shot on target all night.

"We started off well but then we made many poor choices and we could have definitely done better," Pioli said.

"The second goal was key, it changed our attitude. At this level you can't afford to slow down." 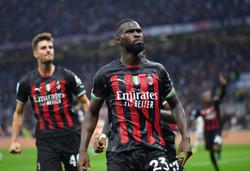