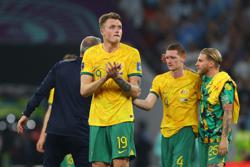 MELBOURNE (Reuters) - Western United defied the sceptics when they captured their first A-League championship in May and will now look to consolidate the gains in the new season starting Friday.

John Aloisi's team will kick off the 2022/23 season against cross-town rivals Melbourne City in a repeat of the title-deciding "Grand Final", which United won 2-0 in a major surprise.

As Melbourne's third side behind Victory and City, Western United were mocked by rival fans when they joined the league in 2019 and failed to build a home stadium promised in their expansion bid.

Few are laughing now, though, with the green-and-black team having built a strong culture on the field, if not a big support base.

"We want to be a team that keeps evolving. We know we had a lot of areas that we could improve," former Australia striker Aloisi told reporters this week.

"The biggest thing for us (over the off-season) was not having that complacency.

"But from the word 'go', I can see that the boys are motivated and ready - and excited. They've trained probably even harder than they did last pre-season."

Construction finally started in March for United's training base in the remote western suburbs of Melbourne but it could be years before their planned 15,000-seat stadium is completed.

They will share the Melbourne Rectangular Stadium on the other side of town with Victory and City this season, one of a raft of venues United used for home games in the last campaign.

United will again be captained by former Italy midfielder Alessandro Diamanti but the 39-year-old will miss Friday's opener as he continues his long rehab from a knee injury dating back to February.

City, part of the consortium that owns Premier League champions Manchester City, will be desperate to make amends for their Grand Final meltdown after finishing top of the league at the end of the regular season.

Champions in the 2020/21 season, City went shopping during the off-season, bringing in Finland international Thomas Lam and Valon Berisha on loan from Ligue 1 club Reims to bolster the midfield.

Four-times champions Victory will also look to challenge for silverware after their resurgence last season under Tony Popovic, who has brought in former Manchester United winger Nani to add a new attacking dimension.

The opening rounds of the season will have a bigger edge for local players, though, as they jostle for spots in Graham Arnold's Australia squad ahead of the World Cup in Qatar.

Central Coast Mariners will look for maximum mileage out of exciting 18-year-old forward Garang Kuol, who recently signed with Premier League club Newcastle United after his lively debut for the Socceroos against New Zealand.

The league, meanwhile, will hope for a controversy-free start to the season after last weekend's Australia Cup final was overshadowed by fans making Nazi salutes.

Having been forced to reschedule dozens of games last season due to a major outbreak of the omicron variant, organisers will also look forward to the first "normal" championship in years, with authorities set to end mandatory five-day home quarantine for those testing positive for COVID-19 from next week.

(This story corrects day to 'Friday' in paragraphs 1, 10)