Following a first half that had plenty of aggression but little decent attacking football, Leeds had to hang on for a 0-0 draw after playing much of the second half with 10 men following Luis Sinisterra's red card.

Marsch, in an interview with Sky Sports after the match, said Villa were the latest team to try to counter Leeds' high-tempo style by throwing the ball away "at every moment" and taking too long on goal kicks.

"This is the best environment in the league for me and fans don't come here to watch a snail's pace match," he added.

The American, who was serving a one-game touchline ban after getting sent off against Brentford last month, said later in a post-match news conference that he felt like Leeds fans were owed an apology.

"(The fans) didn't get an entertaining match, they got a match that was slowed down by an opponent from the first minute ...," said Marsch.

"I will be speaking to someone from the league and (have) already spoken to the referees' committee, it's clearly a tactic."

Asked about Marsch's comments, Villa manager Steven Gerrard said Leeds had indulged in time-wasting after going down to 10 men.

"It works both ways. I'm not really interested in Jesse, what he thinks and his opinion," Gerrard told reporters.

"My priority is Aston Villa and I'm in here to talk about our performance. We'll do what we need to do to get points and that won't change."

Leeds, who are 12th in the league, next face Crystal Palace. 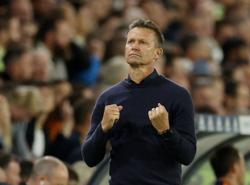