Not only his club went on to set a record in Malaysian football that will be very hard for other teams to emulate but the youngster got the pleasure of tucking in two goals to help spark off the celebrations.

The Southern Tigers, coached by Hector Bidoglio, hammered Negri Sembilan 5-0 in Iskandar Puteri on Saturday and sealed the league title after challengers Sabah went down 0-2 to Terengganu.

JDT lead the table with 46 points after 18 matches while Sabah, their nearest challengers, will not be able to catch up as they only have 36 points with three more matches to go.

JDT were up by two goals before the first half break with Arif scoring the opener in the 35th minute and followed by Argentinian Leandro Velazquez two minutes later.

Arif added his second and the team’s third goal three minutes after the break.

Brazilian import Bergson da Silva struck the next with two goals in the 60th and 88th minutes to emerge as the Super League’s leading hitman with 24 goals.

For the 20-year-old Arif, it was an emotional moment and high point of his blooming career as a professional footballer.

“This is the first time that I’ve scored in the Super League in the starting 11. And I got two goals as we were eventually confirmed as the league champs,” said Arif, who also scored the first goal in their 3-1 win against Terengganu in the FA Cup final three weeks ago.

“I’ve scored in the FA Cup final recently but I never expected this to top it all off.

“I have played for JDT in the last two seasons too but only assisted my teammates to score,” said Arif, who made his first Super League appearance for JDT on March 14, 2020 against Felda United.

Arif, who is a graduate of the JDT Academy, has since gone on to be fielded regularly in the starting 11 under previous JDT coach Benjamin Mora and was the Most Valuable Player (MVP) winner in the National Football Awards last year.

“I’m confident to score more after this but we play as a team, so it does not matter if I score or not as long as we win as a team.”

JDT still have four more matches in their fixtures but coach Bidoglio said they would not take their foot off the pedal when they play Kedah tomorrow.

“Everyone wants to beat the champions and we have to be at our best if we want to keep our unbeaten record in the Super League,” said Bidoglio, who also thanked the team management and players for putting in the hard work and support.

“From the first day I started work in July, I knew I came here to win.

“Now we have the FA Cup and Super League titles. It’s a great feeling especially for the club and also for myself. It’s a brilliant achievement but I don’t want to get carried away and will do my best to get better.” 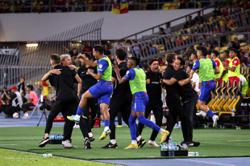 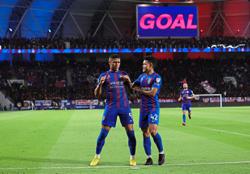