Echeverria, who is from Argentina, said the Premier League success was due to the hard work of the club and players throughout the season.

JDT II were confirmed as the Premier League overall winners after they ended their campaign with a 1-0 win over Selangor II at UiTM Stadium in Shah Alam on Friday.

They needed only a draw to win the title but they bagged the maximum three points, thanks to a 49th minute header by Daryl Sham.

“The combination of experienced players, especially the import players along with the young was the key to JDT II making history.

“I’m very excited about this season and it’s very important because as a club we want to achieve good things.

However, there will be no promotion for JDT II as in previous years because the Malaysian Football League will be restructured in the beginning of 2023. All teams will play in an expanded league. 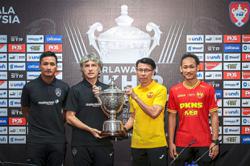