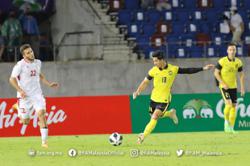 La’vere Corbin Ong was Malaysia’s goalscorer in the game. - Photo by FAM

PETALING JAYA: Harimau Malaya’s bid to silence the Thai crowd with their roar proved successful after beating Thailand 5-3 on penalties in the King's Cup tie at the 700th Anniversary of Chiang Mai Stadium on Sept 22 (Thursday).

The game ended 1-1 in regulation time, which saw the match going into a shootout.

Malaysia got their goal in the 32nd minute when winger Safawi Rasid unleashed a peach of a cross, which was finished off brilliantly by leftback La’Vere Corbin Ong.

But it was the return of inspirational midfielder Brendan Gan to the national team after more than a year that piqued the attention of many.

He impressed in the first half with his work rate and defensive work, as he made several interceptions and kept Thailand’s midfield quiet with his incessant pressing.

In the second-half, the home side upped the tempo and created numerous chances but hit a wall in the form of Ahmad Syihan Hazmi.

The Malaysian goalkeeper saved two one-v-ones and also made a superb single-handed stop in the 72nd minute.

The blemish for Malaysia was the sending off of midfielder Nor Azam Azih in the 92nd minute after receiving a second yellow for a poor challenge on Thailand’s midfielder Sumanya Purisai.

And that led to Thailand’s equaliser when Purisai superbly taken set-piece was finished off by centreback Pansa Hemviboon.

Syihan was the hero when he saved Thailand’s fourth penalty, which winger Supachok Sarachat took.

Malaysia will face Tajikistan in the final at the 700th Anniversary of Chiang Mai Stadium on Sept 25. 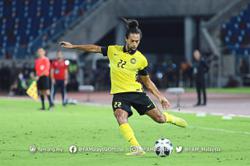 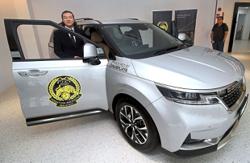 Soccer-Argentina and Mexico fire blanks in feisty first half
Soccer-France's Macron says Qatar must move towards "tangible changes"
Soccer-Brazil have so much talent that we almost feel sorry for our rivals, Casemiro said
Soccer-Argentina ring the changes for Mexico match
Soccer-Mercurial Mbappe fires France into last 16 after 2-1 win over Denmark
Soccer-Lewandowski could have scored a hat-trick, Poland coach
Soccer-'Rebirth? We are not dead', says Costa Rica coach Suarez after Spain humiliation
Soccer-France and Denmark scoreless at halftime
Analysis-Soccer-Joy and relief as Lewandowski finally breaks his World Cup duck
No one imagined Saudi could play at this level, Renard says