The 19-year-old Germany international, who has scored three times in two league matches and added another in their German Super Cup win over RB Leipzig, is nursing a muscle injury and playing him could further worse it, the coach said.

"If it was a Champions League final he would play because there is a break afterwards," Nagelsmann told a news conference.

"But if we are not careful then he can end up with a weeks-long break with torn muscle fibre. If he plays in Bochum and gets injured after 20 minutes then he would be out for longer."

Bayern have won their two league games so far to the top the table as they look for an 11th consecutive Bundesliga title.

Nagelsmann said new signing Mathijs de Ligt could also be out after tearing ligaments in his hand but it will before the game, while Serge Gnabry was also nursing a hand injury and was wearing a plaster.

"We will need to change things around a bit," Nagelsmann said.

Defender Dayot Upamecano, however, should be ready after picking up a knock.

The Bavarians are on six points, as many as second-placed Borussia Dortmund, who can provisionally take over the lead when they face Werder Bremen on Saturday. 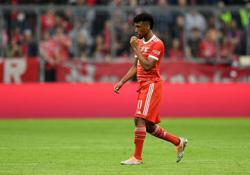