PETALING JAYA: It looks like the Dollah Salleh and Fandi Ahmad combo is beginning to reap results for Pahang.

Since Dollah took over as interim coach and Fandi became a technical adviser, the Elephants have won their last three Super League games.

Rodriguez has been a revelation with five goals from four games and can only get better with the help of Fandi, who was once the most feared striker in Asia.

Dollah said he is on the same page with Fandi when it comes to ideas on how to improve the team.

“Fandi has helped me a lot, he made all the plans with my assistants Ahmad Yusof and Ahmad Shaharuddin Rosdi,” said Dollah.

“We studied PJ City’s game pattern and we gave our ‘input’ to Fandi to come up with a game plan.

“A lot of it also has to do with the psychology of the players, and I told Fandi that some of our players have to be dealt with more gently. So, we treat the players as friends and they have responded well.”

Dollah, though, have some cause for concern as three pillars of the team – Muslim Ahmad, Nick Swirad and Baqiuddin Shamsudin – got injured during Tuesday’s match.

“We head to Melaka on Friday and they may not recover in time,” he said.

Pahang’s win put them in sixth spot with 17 points. 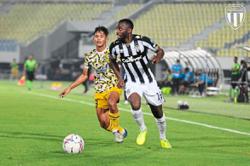