The City Boys will take on the Vietnamese club in the AFC Cup Asean zone semi-final at the Thong Nat Stadium in Ho Chin Minh City today, with many rating the hosts as favourites.

And that’s no surprise as Viettel have some of the best local players in the squad, spearheaded by one man who is feared for his pace and ingenuity.

Nguyen Hoang Duc, 24, is known for his dribbling skills and plays a vital role in the centre or flanks where his adept all-round game helps his side dictate the match’s momentum.

But Gallifuoco is optimistic about KL’s chances, saying that in a one-off knockout game, anything can happen.

“They are a massive threat and are the favourites. But we will do what we always do ... which is to study our opponents extensively and follow the coach’s plans.

“In knockout football, anything can happen.

“Preparations have been excellent, the camaraderie in our team is great. I have said many times that this group of players are like family.”

This season, Gallifuoco has been playing with several centrebacks as KL grapple with a depleted side.

“Unfortunately, due to suspensions and injuries, we have had to chop and change a lot this year.

“But I’m grateful I’m in a team with so many good players who are able to stand in.’’

In the match with Viettel, the odds are stacked against KL but Gallifuoco revealed that coach Bojan Hodak has a plan up his sleeves to get a win.

“We’ve made history already by coming this far and the coach always believes in us and keeps motivating us. 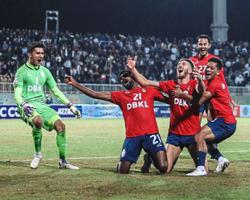 Soccer-Guardiola invites Gundogan and wife to dine or be dropped
Indonesia's president says FIFA will not impose sanctions over deadly soccer stampede
Soccer-Ban Haaland for being too good? Good joke, says Guardiola
Soccer-Man City fined for pitch invasion after win over Villa
Soccer-Ten Hag calls on United players to show 'nasty' side but be smarter
Soccer-Chelsea's Fofana could return before World Cup, says Potter
Soccer-PSG's Mbappe beats Messi and Ronaldo to top Forbes rich list
Soccer-Arsenal can get much better, says Arteta ahead of Liverpool clash
Soccer-Messi out of PSG trip to Reims with minor calf injury
Soccer-Liverpool need to become unpredictable again, says Klopp