Cool and calm: Kedah coach Aidil Sharin speaking at a press conference ahead of their clash against PSM Makassar at the Stadion Kapten I Wayan Dipta in Bali. — Kedah Darul Aman FC

PETALING JAYA: Kedah are bracing for a compact and tight game against Indonesian club PSM Makassar in their AFC Cup Asean zone semi-final at the Stadion Kapten I Wayan Dipta today.

But the Canaries won’t be too uptight about it as coach Aidil Sharin have a game plan to counter their opponents, who are noted for their tactical discipline.

“I’ve analysed many of their games, especially their last game against Persija Jakarta in the Indonesian top division on Aug 5. They play a compact game but attack with great pace,” said the Singaporean, who won the AFC Cup Asean zone final with Home United in 2018.

“But since they played a game just three days ago, we may have a slight advantage as we’re better rested. Our plan is to get a result in 90 minutes.”

Aidil’s charges will need to be sharp to penetrate the defensive Makassar, coached by Portuguese Bernardo Tavares.

They must also be wary of their quick counter-attacks led by the Sayuri brothers, Yance and Yakob, and right winger Rizky Eka Pratama.

Makassar’s Dutch captain Wiljan Pluim, a towering presence at 1.96m (6’4”), will also be a handful with his precision passing, set-piece expertise and long-range shots.

Aidil is no stranger to Pluim’s prowess.

“I’ve watched him for many years, he has been in this region for quite a while now. He can orchestrate attacks quickly and utilises the speedy players well.”

Makassar finished top of Group H in the early stage of the tournament while Kedah reached the zone semi-final after topping Group G on a better goal difference after being tied on six points with Visakha and Bali United. 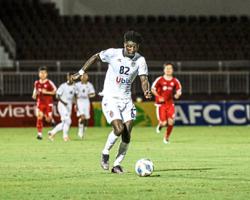