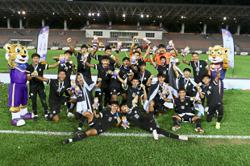 Confident: Nik Shareef Haseefy (left) said Terengganu have what it takes to get to the final after 11 years because of their great form at home. — Bernama

PETALING JAYA: Terengganu winger Nik Shareef Haseefy will be on a dual mission when he enters the pitch for the FA Cup semi-final tomorrow.

His first, obviously, is to help his club qualify for the final. But the second – and more important one – is to prove a point to Selangor, the club that loaned him to Terengganu.

“It is exciting to face Selangor, the side I am contracted to. Like any other player, I wanted to prove my worth, especially when I could not get first-team opportunities with Selangor,” he said.

The motivation was obvious as he and his mates trained before the game at the Sultan Mizan Stadium in Gong Badak tomorrow.

Shareef, 25, said he still respects his employers, but he wants to show true abilities on the field, especially in a crucial game like a semi-final.

“I guess my style of play doesn’t fit with the tactics of the current Selangor coach. Hence the decision to move to Terengganu on loan,” he said.

“I made the right choice because I am now getting games under Nafuzi Zain. I have started five matches and come on as substitute in four, so in terms of game development, it looks pretty good.

“The coach has guided me well, and I am loving my time here so far. I hope to help the team into the final.”Shareef first played for Pahang from 2018 to 2020 before joining Selangor last year.

However, a knee injury scuppered his time with the Red Giants, and he missed out on the whole 2021 season.

This year, he was used more in the feeder team, Selangor II, but he wanted more exposure in the Super League, which he has got with the Turtles.

Shareef said Terengganu have what it takes to get to the final after 11 years because of their great form at home. The Sultan Mizan Stadium can also be a cauldron for any opposition team.

“I know the quality of Selangor because I’ve been with them for two seasons. On their day, they can be unstoppable,” said Shareef.

“But we have home advantage. I am sure the fans will rally behind the team.

“This is the best chance to take the team to the final.” 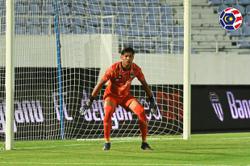