SAN SALVADOR (Reuters) - FIFA warned on Wednesday it could suspend El Salvador if its state-led sports institute removes the heads of the Salvadoran Football Federation (FESFUT) in favor of hand-picked officials, according to a letter shared by the federation online.

Last week, seven directors of the FESFUT executive committee were temporarily suspended from their duties by a disciplinary court tied to the INDES national sports institute.

INDES suspended them saying they refused to "adapt" their statutes to those of a new law requiring the country's sports organizations to comply with governmental orders.

The court also ruled it would initiate a process to evaluate the legal situation of the federation and that the INDES Steering Committee would appoint its own leaders to begin adapting the FESFUT's statutes.

FIFA, in the letter shared by FESFUT, argued the decision was "outside any statutory and regulatory structure applicable to the federation" and that it recognizes the suspended leaders.

"FIFA and CONCACAF also consider that the facts described above constitute an undue interference in the affairs of the federation and therefore violate the obligations imposed on FESFUT in... FIFA statutes," reads the letter.

CONCACAF is one of FIFA's continental confederations, governing the sport in North and Central America as well as the Caribbean.

The world's soccer regulatory body said if the committee appointed by the INDES was not withdrawn by July 25, the case would be immediately submitted to the FIFA Council for a decision that could include the suspension of FESFUT, which would then lose its rights as a member organization.

The decision could mean El Salvador would become ineligible to participate in the League of Nations, the CONCACAF Gold Cup and the World Cup.

The president of the INDES, Yamil Bukele, half-brother of El Salvador President Nayib Bukele, denied the government had intervened in the decision last week and said the institute would "defend" its position in the face of a possible FIFA sanction. 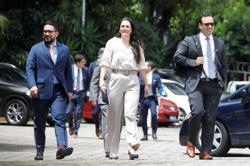