PETALING JAYA: Johor Darul Ta’zim (JDT) coach Benjamin Mora was treated to a birthday ‘’kick’’ that he can savour for weeks as the Mexican turned 43 yesterday.

The Southern Tigers entertained their leading tactician with a roaring show as they mauled Selangor 5-1 in their Super League match at the Sultan Ibrahim Stadium in Iskandar Puteri on Friday.

The sumptuous win also saw them regain the top spot from Sabah. JDT have 20 points from seven matches with two games in hand compared to the Rhinos who lie second with 18 points.

A delighted Mora was thrilled to see his players run riot in what was their first league game since May 18, when they were held 2-2 by Pahang.

“It has been a while since our last game and a win like this was exactly what we needed.

“We prepared and executed the game plan well. The players who return from the national team’s assignments were all sharp,’’ he said.

“We took advantage of the space given and the first three goals by Bergson (Da Silva), Leandro (Velasquez) and Fernando (Forestieri) were beauties. That gave us the advantage and confidence.

“I always say that you will not win if you don’t expect to win. If you don’t think you can score, you won’t score. The root of our belief is having good and high expectations.’’

Brazilian striker Da Silva was the toast of JDT with his brace in the third and 54th minutes, while Argentinians Forestieri (24th) and Velasquez (34th) and substitute Mohamadou Sumareh (92nd) were also on target.

Selangor pulled one back via substitute Norhakim Hassan in the 82nd minute.

The long-range strikes by Da Silva, Forestieri and Velasquez certainly caught the eye but one can question Selangor goalkeeper Khairulazhan Khalid as his positioning was suspect.

“To change the goalkeeper during the game is something I’m not fond of.

“We win and lose together. It’s easy to blame one person but that’s not my style. We just have to bounce back in the next game.” 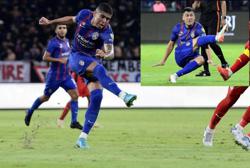