(Reuters) - Liverpool left back Andy Robertson labelled the organisation of Saturday's Champions League final against Real Madrid a "shambles" after kick-off was delayed for 35 minutes due to fans trying to force their way into the Stade de France in Paris.

Riot police fired teargas at fans as chaos ensued near the Liverpool end of the ground, which governing body UEFA said was caused by fake tickets that did not work in the turnstiles. 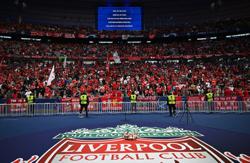