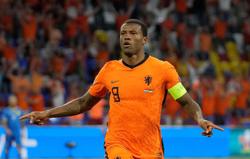 AMSTERDAM (Reuters) - Bologna midfielder Jerdy Schouten has been added to the Netherlands squad and Bruno Martins Indi handed a recall as coach Louis van Gaal on Friday finalised his selection for their four Nations League matches next month.

It is the first call up for the 25-year-old Schouten who has spent the past three seasons playing in Serie A.

The 30-year-old defender Martins Indi, who plays for AZ Alkmaar and was formerly at FC Porto and Stoke City, last won a cap for the Dutch five years ago.

He trimmed it to 26 by dropping defender Owen Wijndal, midfielders Jordy Clasie and Marten de Roon and the striking pair of Arnaut Danjuma and Luuk de Jong.

Georginio Wijnaldum was the notable omission from preliminary squad as he has struggled for form at Paris St Germain.

Mexican-based striker Vincent Janssen, who was surprise selection a fortnight ago, will miss the first game as he is getting married on June 5. The former Tottenham Hotspur forward last played for the Netherlands in 2017.

“Everyone knows that the agenda is already dominated by the coming World Cup. Soon there will be little time to prepare, so we must make the most of the available time,” said Van Gaal in a statement released by the Dutch Football Association.

“Only during this period and in September we still have the chance to see new players at work. That is why I now choose Bruno Martins Indi, Jerdy Schouten and Vincent Janssen.

“These are interesting players that I would like to see up close during a training camp, although I already know some of them of course. I would like to emphasise that everyone remains in the picture with us, including the players who have not received an invitation now,” he added.