Following the Gunners' midweek defeat at Newcastle United, Spurs' destiny was back in their own hands and two goals from Dejan Kulusevski and Heung-Min Son plus a Harry Kane header were more than enough to guarantee Antonio Conte's side fourth spot.

Tottenham finish the campaign on 71 points, two ahead of fifth-placed Arsenal, and will be back in Europe's elite club competition for the first time since the 2019-20 season. The Gunners will play in next season's Europa League.

"I have to be honest, I think (finishing fourth today) is one of the most important achievements in my career," Tottenham manager Antonio Conte told Sky Sports.

"I think we've done a really good job and for me this is a big achievement in a league that is very difficult because here you find the best players and best coaches. I'm happy even though I didn't lift any trophy this season."

Son's double left him level with Liverpool's Mo Salah in the Golden Boot race to be Premier League top scorer.

"It's incredible to have this award... I dreamed of it as a child. Literally it's in my hands. I can't believe it," the South Korean told the BBC.

Spurs opened the scoring in the 16th minute through Kulusevski after Pierre-Emile Hojbjerg set up Rodrigo Bentancur with a lofted ball to the edge of the box which the Uruguay international squared to the Swede who netted from close range.

Kane doubled the lead in the 32nd after a mistake by Norwich keeper Tim Krul, who played the ball straight to Bentancur near the corner of the area and his cross was met by the England striker who scored with a diving header into an empty net.

It was Kane 17th league goal this term, leaving him fourth in the standings and one goal behind Cristiano Ronaldo.

Norwich, who rarely approached Tottenham's area in the first half, returned with significantly more life after the break and striker Teemu Pukki had a powerful shot blocked in the 47th.

But Spurs continued to enjoy their afternoon and January signing Kulusevski made it 3-0 in the 64th minute with a fine individual effort, firing into the top left corner from the edge of the box for his fifth goal in 18 league games.

Son added two more in the 70th and 75th minutes, after being denied by Krul three times in 10 minutes.

The victory at Norwich equalled Tottenham's best result this season in March when they won 5-0 at home to Everton.

Norwich, who won only one of their last 16 league games, finished bottom on 22 points and have now been relegated from the Premier League seven times since 1995, sparking protests from some fans outside the stadium after the game. 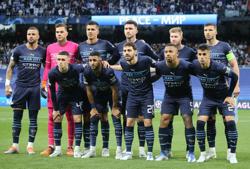