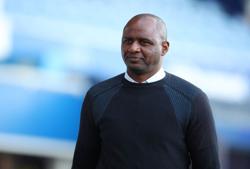 (Reuters) - Patrick Vieira said football players, coaches and staff need to be safe at stadiums after the Crystal Palace manager was involved in an altercation with a fan at Goodison Park during a pitch invasion last week.

Everton fans invaded the pitch following Dominic Calvert-Lewin's 85th-minute winner and at the final whistle of their 3-2 victory over Palace which secured their Premier League survival.