TURIN, Italy (Reuters) - Olympique Lyonnais' striker Ada Hegerberg put almost two injury-plagued years behind her to power them to an eighth Women's Champions League title with a 3-1 win over Barcelona in which she scored one goal and made another in a thrilling battle.

The competition's all-time top scorer, Hegerberg suffered a number of setbacks as she struggled to overcome a knee injury, spending 21 months out of the game before returning in October and ending the season as a Champions League winner.

"I can never imagine standing here one year after (my injury). I've come a long way, I get goosebumps thinking about it," she said in a post-match interview, clutching the Norwegian flag.

On Saturday, Hegerberg was closely shackled from the start, but her appeals for free kicks to Finnish referee Lina Lehtovaara fell on deaf ears, and the Norwegian did not take long adjusting to the physical nature of the game.

With her side a goal up thanks to Amandine Henry's stunning sixth-minute opener, Hegerberg was denied a free kick after a tussle but recovered enough to send a fierce volley high and wide of the target.

Minutes later she had regained her composure and got back to doing what she does best, finding just enough space in the penalty box to squeeze a precise downward header from Selma Bacha's cross into the net in the 23rd minute.

Ten minutes later she effectively put the game out of reach, keeping her cool as Lyon again won the ball high up the pitch and finding Catarina Macario at the far post for the simplest of finishes.

Though her late volley struck the post, the second half was all about defending and the Norwegian, who has ended her self-imposed international exile and will play at the Euros in England in July, charged around to shut down Barca's back line.

"I think it's important to set the standard from minute one, that's been an aim on a personal level," she said of her defensive effort.

With a sixth Champions League title under her belt, the Norwegian is showing no signs of being satisfied.

"Resilience, hard work - it's so motivating. I'm only 26 as well, so let's keep this going!" Hegerberg added. 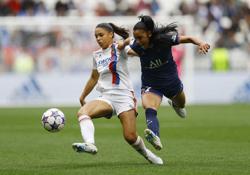