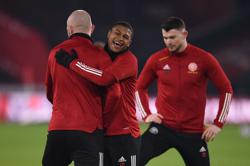 (Reuters) - Nottinghamshire Police on Wednesday arrested a 31-year-old man on suspicion of assault after Sheffield United's Billy Sharp was attacked on the pitch at the end of the second leg of their Championship playoff semi-final at Nottingham Forest.

Forest supporters ran onto the pitch when the hosts sealed a 3-2 win on penalties, after the tie was locked 3-3 on aggregate. Television cameras showed an individual approach Blades striker Sharp on the sidelines and attack him.