Bring on your best, says Maloney

On the double: Hadi Fayyadh scored both goals against Cambodia. — Bernama

BRAD Maloney has a simple message for his boys – to be champions, you have to beat the best.

Thus, it does not matter whether Malaysia face Indonesia or Vietnam in the football semi-finals, both teams will be tough to beat as they have some of the best talents in the region, if not Asia.

He said this after watching his side were held 2-2 by Cambodia in their final Group B game at the Thien Truong Stadium in Nam Dinh yesterday, leaving his team uncertain of top spot in the group.

The Harimau Muda have eight points from four games and may end up second in the group if Thailand beat Laos in a later match.

Maloney admitted that Cambodia had given Malaysia a real fright.

“They are a good team. They made life tough for us with their organised play and quick breaks. They deserved more points than what they managed (four points).”

For now, Maloney’s attention will solely be on the semi-final, with the hope that they can go all the way to the final at the My Dinh Stadium on May 22.

“Both teams are sides to be reckoned with in the region. To be champions, you have to beat the best sides. I have told the boys that.

“My boys are ready to face anyone.

“Whether it’s Indonesia or Vietnam, we will go in with the intention of playing our game,” he said. 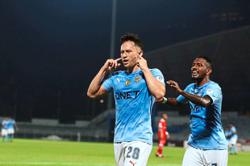