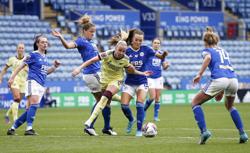 Miedema scored twice with powerful shots in the opening 13 minutes to send Arsenal in at 2-0 up at the break, and an own goal by Rachel Corsie seven minutes into the second half saw Villa crumble.

Beth Mead, Lotte Wubben-Moy and Stina Blackstenius all got on the scoresheet before Parris smacked home a 90th-minute penalty to reach a half-century of league goals in the English top flight as the Gunners climbed to 49 points, one behind Chelsea.

Arsenal face Tottenham Hotspur, who play Everton later on Sunday, in midweek before finishing their league campaign away to West Ham, while Chelsea meet Birmingham before taking on Manchester United in their final fixture.

Earlier in the day, Manchester United cruised to a 3-0 win over West Ham United to climb back into third place above Manchester City, who thumped Brighton & Hove Albion 7-2 on Saturday.

At the bottom of the table, Leicester grabbed a 0-0 draw with Reading for what may prove to be a vital point in the battle against relegation. The Foxes are on 13 points after 21 games, five ahead of bottom side Birmingham, who have two games in hand. 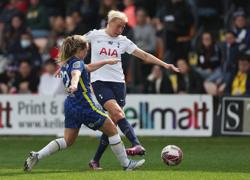