LYON, France (Reuters) - Olympique Lyonnais made the most of some woeful goalkeeping by Barbora Votikova to beat Paris St Germain 3-2 at home in a lively women's Champions League semi-final first leg on Sunday.

Catarina Macario's double and a penalty by Wendie Renard, who became the first player to make 100 appearances in the competition, gave the seven-times champions a slight edge ahead of the return leg in Paris next Saturday. 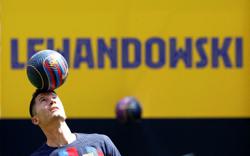