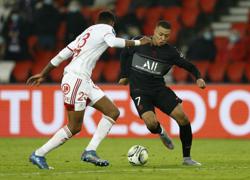 Messi stunned the sports world when he left boyhood club Barcelona and joined PSG on a two-year deal in the close season.

But the 34-year-old Argentina international has had a slow start to life at PSG, scoring four goals in 12 games in all competitions, including one in Ligue 1.

"Leo has an incredible talent and has always scored, so he will score plenty more here," Pochettino told reporters ahead of Saturday's trip to Lens. "It's a matter of time and efficiency.

"He gets a lot of chances in every game. The ball will eventually go in and he will help us a lot, as he already does."

PSG are top of the table on 41 points after 16 games, 12 points above Olympique de Marseille, who have a game in hand.

Pochettino said the Parisian club will face a tricky test against fifth-placed Lens and urged the players to be more clinical in finishing their chances.

"The key will be to score goals by improving our efficiency in front of goal," Pochettino said. "We will play against a very physical Lens team. They are having a great season, and have a very good team with a good coach (Franck Haise)."

PSG said in a statement that defender Sergio Ramos' workload has been adjusted due to muscle fatigue and the 35-year-old will return to training on Sunday, having missed their 0-0 draw with Nice nL1N2SM3DT on Wednesday.