KUALA LUMPUR: Kuala Lumpur’s triumph in the Malaysia Cup was perfect in so many ways for the team’s physiotherapist, Renesh Prabaharan (pic).

Renesh, 31, who got married yesterday, described the 32-year wait to lift the Cup as a dream come true.

And another reason to cherish the moment is that he is continuing the legacy of his late father K. Prabaharan, who was the physiotherapist with the City Boys when they achieve the Cup treble from 1987-1989.

“It never crossed my mind that we would win the Malaysia Cup but it turned out to be a fairy tale run. It’s the best wedding gift for me.

“It was also always my dream to follow in my father’s footsteps to become a physiotherapist for KL,” said Renesh.

Renesh, who served with the national basketball squad at the 2017 SEA Games and the National Football Development Programme, tied the knot with M. Rubini yesterday.

KL emerged champions of the 100th edition of the prestigious Cup when they stunned defending champions Johor Darul Ta’zim 2-0 at the National Stadium in Bukit Jalil two days ago.

“My husband was in the team when they won their last Malaysia Cup in 1989, so I am very proud and happy for Renesh. I can see Renesh’s dedication because before the final, many injuries had cropped up, so as a physiotherapist, there was much for him to do. And he also has to think of his wedding.”

Chan Sok, who is also a physiotherapist, hopes that Renesh will continue to keep up the good work with KL. — Bernama 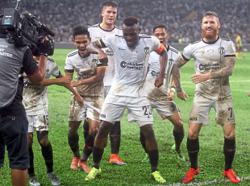