BERLIN (Reuters) - Hertha Berlin sacked coach Pal Dardai on Monday following a disappointing run in the Bundesliga with just two wins from their last eight games, and replaced him with Tayfun Korkut.

The 47-year-old Korkut, who has also coached Hanover 96, VfB Stuttgart and Bayer Leverkusen among other, signed a contract until the end of the season.

"We want to give the team a new impulse with Tayfun Korkut," said Hertha sporting director Fredi Bobic.

"Tayfun has show in the past that he can not only stabilise a team but also develop it further."

Hertha drew 1-1 against visitors Augsburg on Saturday to stretch their winless run in the league to four matches and remain in 14th place, one point above the relegation playoff spot.

Hertha received more than 300 million euros ($338.58 million) in investment in the past three years from major investor Lars Windhorst but the team has battled relegation in recent seasons. 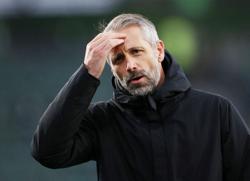