(Reuters) - Leonardo Jardim wants his Al Hilal side to make an impression against the world's elite after steering the Saudi Arabian club to a record fourth Asian Champions League title.

Jardim will take his team to January's FIFA Club World Cup in the United Arab Emirates after they handed South Korea's Pohang Steelers a 2-0 defeat in Riyadh on Tuesday to claim the continental crown.

European champions Chelsea are among the teams that have qualified for the annual Club World Cup, which was originally scheduled to be played in Japan in December but moved to the Gulf as a result of the pandemic.

"We play every game to win it," said Jardim, who was appointed Al Hilal coach in June.

"We know there will be strong teams in the Club World Cup, and we'll not be favourites, but our objective will be to win as many matches as possible."

Al Hilal have dominated at Asian level in recent years with Tuesday's title the club's second in three seasons, and it comes after earlier continental success in 1991 and 2000.

Nasser Al Dawsari's goal after 16 seconds at the King Fahd International Stadium was the fastest ever scored in an Asian Champions League final and a second-half effort from Moussa Marega sealed Al Hilal's success.

"We fully deserved to be the champions," said former Monaco boss Jardim, who has led Al Hilal since the start of the competition's knockout rounds.

"In the four games we played in this competition since my arrival, we scored nine goals and conceded one, and that shows how strong and dominant we have been."

The Asian Champions League success was Jardim's first at continental level as a coach after winning a league title in Greece with Olympiacos and the Ligue 1 crown with Monaco in 2017.

"It's a wonderful moment. This was one of the reasons why I joined Al Hilal," he said.

"This is my first title with the club. Special thanks to the players for their attitude and commitment in this match. We fought from start to finish and kept the opponents under pressure throughout the game." 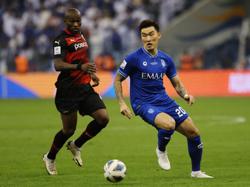