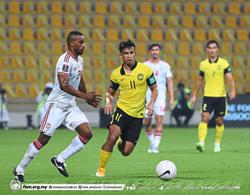 Rest well: Arif Aiman was excluded because he has been playing too many games.

PETALING JAYA: The football fraternity is abuzz over the omission of top players from the AFF Suzuki Cup squad but Malaysia coach Tan Cheng Hoe is unperturbed and will stick to his guns.

When the names of the 28-men squad were released on Wednesday, there were question marks over some players’ exclusion despite them performing well in the Super League and the ongoing Malaysia Cup.

Instead, Cheng Hoe selected players who lacked game time, which drew ire of the fans. Some even speculated that there are “invisible hands” involved in team selection.

But the 53-year-old brushed it aside adding that it is hard to please everyone.

“Any trainer around the world, when they pick a squad, they would only think about getting good results. Whenever a list is announced you will get positive and negative views,” he said.

“Even the England national team are always under scrutiny because the coach (Gareth Southgate) omits some top players,” he quipped.

During the squad’s announcement at Wisma FAM, the former Kedah coach revealed that rising star Arif Aiman from JDT was excluded because he has been playing too many games.

In all competitions, the 19-year-old right winger has so far played 29 games for club and country.

He said the same applies to Corbin (25 games), Matthew (23 games) and Farizal (28 games) as they too did not have much rest since the World Cup 2022-Asian Cup 2023 second-round qualifiers.

However, the statistics pale in comparison to other footballers around the world. Spain’s 18-year-old midfielder Pedri played 52 games for Barcelona in the 2020-2021 season and 10 matches for his country this year.

Even Thailand’s top winger Supachok Sarachat, 23, played 34 games for his club Buriram United last season, 12 so far this season and three for the War Elephants this year.

But Cheng Hoe said it’s a case of different strokes for different folks.

“I do not like to compare. We can’t even compare Spain and Malaysia players. You’ve to understand the football is totally different. It’s different.

“At the end of the day, I’m responsible. I believe in the boys that I’ve picked. Some of them already know what I want and it will continue.

“You will always be judged. As coach, I want to do something meaningful and I aim to fulfil the target set by the management... to get into the final.”