Burnley remain in the drop zone, in 18th place on four points, while Southampton, with one win, are hovering above relegation trouble in 16th on eight points.

Burnley took the lead in the 13th minute when Cornet lost his marker to glance a Matt Lowton corner into the far bottom corner.

Southampton piled on the pressure in response and Theo Walcott pulled a shot wide from a promising position before Nathan Redmond missed an open goal from point-blank range after good work from their Albania forward Armando Broja.

Tino Livramento then hit the post as Southampton battered at Burnley's goal and it was the impressive 18-year-old who finally brought the Saints level, four minutes before the break, with a header from Redmond's corner.

Broja put Southampton ahead in the 50th minute after Burnley defender James Tarkowski gave the ball away to Ibrahima Diallo.

But Ivorian Cornet, a close-season signing from Olympique Lyonnais, earned Sean Dyche's Burnley side a point, beating goalkeeper Alex McCarthy with a superb first-time strike from the edge of the box.

It was the fifth time this season that Burnley had taken the lead but failed to win and Dyche was disappointed with the way his side gave up the two goals.

"It was another positive display with a couple of mistakes. Eradicate them and we are in good shape with what we are trying to achieve," he said.

"I think there were a lot of good things about our performances. I've been saying that a lot lately but we had two excellent goals by Maxwel," he added.

Southampton boss Ralph Hasenhuttl felt a draw was a fair result but was pleased with the impact of youngsters Livramento, 18, and 20-year-old Broja, who is on loan from Chelsea.

"They are very important players for us and they are absolutely positive signings we could make in the summer. We know that young players can get a chance in our club," he said.

"In the Southampton way, we want to work with these young lads and make them better. They may not stay long with us but we will help them." 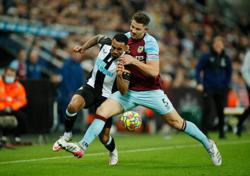 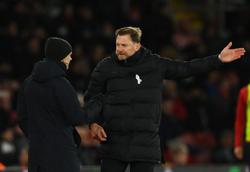