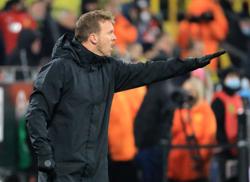 Bayern coach Julian Nagelsmann was stuck in quarantine after testing positive for COVID-19 earlier this week but he set up what he called an 'analysis centre' in his home kitchen, and then passed on instructions to his assistants.

The set up paid dividends as Bayern still managed another flurry of goals.

"The team played great football especially in the first 30 minutes," Bayern assistant coach Dino Topmoeller said. "At the end of the day it was a fully deserved win.

"Julian was in contact with our analysts in the stands and communicated with them via telephone when he needed to intervene in the game."

No other team in Bundesliga history has managed to score 33 goals after nine games.

Serge Gnabry opened their account in the 16th minute after an earlier goal by the Germany international was disallowed following a VAR review.

The Bavarians, who scored five times against Bayer Leverkusen last week and another four goals to beat Benfica in the Champions League on Wednesday, struck again on the half-hour mark, with Lewandowski spectacularly thundering in a shot from 20 metres to take his league season tally to 10 goals.

The Pole, who had missed a couple of easy chances earlier in the game, has now scored 26 goals in 34 league matches in the calendar year of 2021, just six shy of the all-time Bundesliga record set by Gerd Mueller in 1972.

Late goals from substitute Eric Maxim Choupo-Moting and Kingsley Coman sealed Bayern's win and moved them up to 22 points, one ahead of Dortmund, for Topmoeller's second win this week as Nagelmsnan's replacement.

Midfielder Joshuma Kimmich caused some raised eyebrows after the game confirming he had not yet been vaccinated and was not planning to in the near future.

(Reporting by Karolos GrohmannEditing by Toby Davis and Pritha Sarkar) 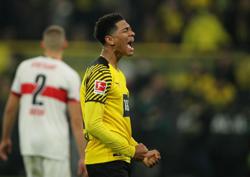 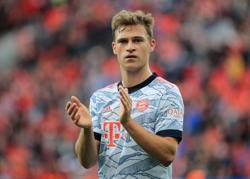