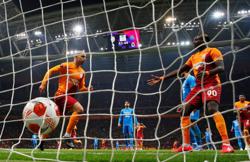 ROME (Reuters) - Lazio and Olympique Marseille drew 0-0 to keep alive their hopes of reaching the Europa League knockout stages and Red Star Belgrade stayed on course with a 1-1 draw at Denmark's Midtjylland on Thursday.

Chances went begging at both ends as Lazio striker Ciro Immobile hit the woodwork and had a goal scrapped for marginal offside after a VAR check while Marseille goalkeeper Thomas Strakosha produced a string of saves in Rome.

Lazio are second in Group E on four points from three games, behind Galatasaray on goal difference with the Turkish side visiting bottom team Lokomotiv Moscow later on Thursday. Third-placed Marseille have three.

Red Star, the 1991 European Cup winners, took the lead against the run of play against Midtjylland in Group F thanks to a 58th-minute volley from midfielder Mirko Ivanic.

The home side missed chances in a lop-sided first half as goalkeeper Milan Borjan kept the visitors afloat but Nikolas Dyhr equalised in the 78th minute after Victor Lind's shot cannoned off the woodwork.

Red Star stayed top on seven points from three games, one ahead of Portugal's Braga who won 1-0 at Bulgaria's Ludogorets. Midtjylland have two points and Ludogorets one.

Rapid Vienna rekindled their hopes of advancing with a 2-1 home win over Dinamo Zagreb, putting them level with the Croatian champions on three points behind Group H leaders West Ham United who host Belgium's Genk later.

Marco Gruell fired Rapid ahead and defender Maximilian Hoffman sealed the win after Mislav Orsic had equalised in an action-packed first half.

Royal Antwerp took an early lead before fighting back to earn a 2-2 draw at Fenerbahce, whose Ecuador winger Enner Valencia scored twice and missed a penalty in Group D.

The result did neither side any favours as they stayed behind the top two, with leaders Olympiakos visiting second-placed Eintracht Frankfurt later.

In Group G, front-runners Bayer Leverkusen and Real Betis stayed on course to advance after their 1-1 draw kept them level on seven points ahead of third-placed Celtic, who have three after Tuesday's 2-0 home win over Ferencvaros. 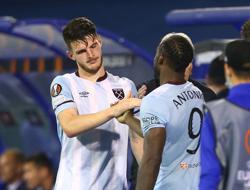