Hard at work: Nik Akif (No. 8) in action for the Malaysia Under-23 team in a friendly against Kedah. — Photo by FAM

PETALING JAYA: Losing a loved one is heartbreaking.

It’s tough for midfielder Nik Akif Syahiran Nik Mat after losing his father but the 22-year-old is determined to pay tribute to the man who honed his football skills by returning to training.

On Tuesday, his father Nik Mat Yusof, 50, died in an accident in Kuala Krai, Kelantan and Nik Akif immediately rushed to Kota Baru to pay his last respects and returned to train with the national Under-23 team the very next day.

Despite his loss, Nik Akif said he would be going to the AFC Under-23 Asian Cup qualifiers in Mongolia from Oct 25-31 to fulfil his late father’s wishes.

“He always wanted to see me become a top player. I haven’t reached that standard yet, but he believed that I could do it. I want to fulfil his wish,” said the Terengganu player.

“My father had followed my career closely and had always advised me. I hope to put to good use all his advises by having a good outing in Mongolia.

Nik Akif is one of the four players in the Under-23 squad over the age of 21. The others are goalkeeper Azri Ghani, rightback Quentin Cheng and winger Hakimi Abdullah.

Nik Akif will be the key man in midfield and is expected to combine with captain Mukhairi Ajmal Mahadi.

Both of them will be tasked to dictate the tempo and also ensure a vital link with the forwards and defenders.

“We’ve played friendlies and have trained well. The whole team are prepared for the task ahead. We will be out to do our best to make the nation proud.”

Brad Maloney’s squad will meet Laos on Monday, Mongolia (Oct 28) and Thailand (Oct 31) as they seek a spot in the final round of the Under-23 Asian Cup in Uzbekistan in June 2022.

The three matches are scheduled to take place on the artificial pitch of the MFF Stadium in Ulaanbaatar. 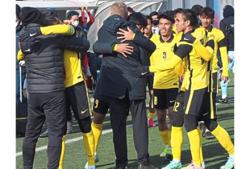