(Reuters) - Newcastle United manager Steve Bruce has been made the "fall guy" at the Premier League club and the criticism he has faced since being appointed in 2019 has been difficult to take, the 60-year-old's son Alex said.

Bruce has endured a largely difficult time after he replaced fan-favourite Rafa Benitez and speculation is rife that he is on his way out following the team's takeover by a Saudi Arabia-led consortium this month.

He vowed to carry on for as long as the new owners wanted him to following a 3-2 defeat by Tottenham Hotspur on Sunday in his 1000th match as a manager.

"It's been tough. I wouldn't sit here and lie and say it hasn't, it's been tough to watch the criticism," Alex Bruce, who played in the Premier League with Hull City, told the BBC.

"Since he took the job... the lack of respect that's been shown considering he's done 1,000 games has been unbelievable."

Alex Bruce said his father was not given opportunities to bring in reinforcements by former Newcastle owner Mike Ashley.

"He had an owner who was trying to sell the club," Alex Bruce said. "An owner who didn't really want to put any money of his own into the club for a number of reasons, he could only use the money the club generated and with the COVID-19 pandemic there wasn't any money there.

"He tried to strengthen the squad in the last window. They desperately needed reinforcements in defensive areas, I think he was very frustrated he couldn't do that, so there's been a number of things that have made the job difficult.

"He has been the fall guy. The amount of times I've said to him, 'Why don't you let someone else do the press?' And he just says, 'Because I'm the manager, it's my responsibility'."

(Reporting by Shrivathsa Sridhar in Bengaluru; Editing by Muralikumar Anantharaman) 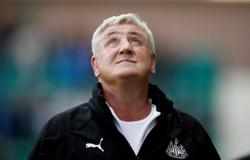