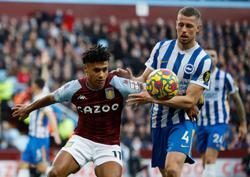 NORWICH, England (Reuters) -Norwich City are still searching for their first Premier League win this season after playing out a goalless draw with Brighton & Hove Albion at Carrow Road on Saturday.

Graham Potter's Brighton dominated possession while hosts Norwich had the better chances but both teams failed to take advantage and were found wanting in front of goal.

The visitors had lost only one of their opening seven league games but looked below-par while Daniel Farke's Norwich have now failed to find the net in four straight games across all competitions.

"It was a hard-fought game. We weren't at our best, but not too bad either and in the end, after both teams had chances, we accept the point," Brighton manager Graham Potter told the BBC.

"We couldn't find the final bit to score the goal, but Daniel Farke probably thinks the same thing."

Brighton had a penalty appeal denied in the first half when Neal Maupay claimed contact from goalkeeper Tim Krul.

"If the referee doesn't give a penalty, it's a tough one for VAR to overrule," Potter added.

Krul also pulled off a fingertip save later to deny Leandro Tossard, tipping his volley onto the crossbar.

Norwich forward Josh Sargent twice let Brighton off the hook either side of the break, squandering two opportunities to secure three points for the first time this season.

Sargent's tame shot towards the open goal after goalkeeper Robert Sanchez missed a clearance was cleared by Shane Duffy, while in the second half, Dan Burn blocked the American forward's attempt on goal with a last-ditch tackle.

Maupay also had a chance to seal the win for Brighton in the closing stages but shot off-target from Solly March's cross.

Brighton moved provisionally up to fourth with 15 points while Norwich remain rooted to the bottom of the league standings with two points, but Farke took positives from their second consecutive clean sheet.

"You always want to take a big step, but you have to take what you can at this level," Farke said.

"We are not dancing on the table, it's only a point. The final piece was missing but it is a step in the right direction."

(Reporting by Hritika Sharma in Bengaluru; Editing by Hugh Lawson and Christian Radnedge) 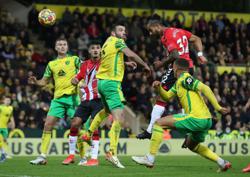