PETALING JAYA: Penang have yet to hit top gear in the Malaysia Cup but Sheriddin Boboev believes they will pick up the pace soon.

They were a letdown at their home ground when they lost 1-3 to Premier League runners-up Sarawak United and drew 1-1 with Kuala Lumpur in Group A matches at the City Stadium in Georgetown.

It’s disappointing that they just have one point from two matches as much was expected from them after a superb outing in the Super League.

The 2020 Premier League champions finished third in the Super League.

The 22-year-old Boboev wants his team to look to the past to draw inspiration.

“We were successful in the league because we were focused as one family. When the odds were against us, we stuck together as brothers,” said the Tajikistani winger, who has won 22 caps with his country.

“We have to remind ourselves that it was this unity that brought us success and we’ve to use it as an inspiration.

“We’re keeping ourselves in top condition during training session and will take part in few friendly matches.”

In the Malaysia Cup, Boboev has scored a goal and an assist.

In the Super League, he scored six goals and had four assists in 20 matches.

“My first year (in 2020) here was very hard mentally because of the Covid-19 situation, and I took time to adapt but the experience has made me stronger,” said Sheriddin, who had played Istiklol and Barkchi in the Tajikistan top division. 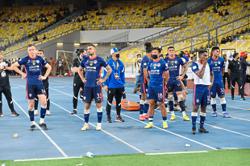