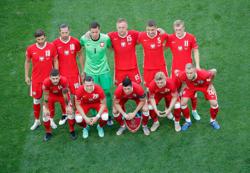 BELGRADE (Reuters) - Two goals from striker Dusan Vlahovic steered Serbia to a 3-1 home win over Azerbaijan in their 2022 World Cup qualifier on Tuesday and left the Balkan nation top of Group A, a point ahead of Portugal.

Serbia have 17 points from seven games while Portugal, who thrashed Luxembourg 5-0 at home on the back of a Cristiano Ronaldo hat-trick, have 16 from six ahead of their visit to Ireland on Nov. 11.

The results left the two-team race for the group's top spot and an automatic berth in next year's tournament in Qatar set for a thrilling climax in the last round of games on Nov. 14, when Portugal are at home to Serbia.

Serbia missed several chances before Vlahovic, who scored a sublime winner in Saturday's 1-0 victory at Luxembourg, drilled in a 30th-minute penalty after he was hauled down in the area by visiting defender Hojatollah Haghverdi.

Azerbaijan equalised out of the blue with the last kick of the first half after home goalkeeper Predrag Rajkovic lost possession by trying to dribble past two opponents, gifting Emin Makhmudov a simple finish into an empty net.

Vlahovic restored Serbia's advantage with a predator's goal in the 53rd minute when he stabbed in a close-range rebound after visiting keeper Shakhruddin Magomedaliyev could only parry a swerving Darko Lazovic shot.

The marauding Vlahovic, who also shaved the post in the first half, went close three times to completing a hat-trick and his efforts included a spectacular overhead kick before Dusan Tadic sealed Serbia's win with an 83rd-minute penalty.

Tadic, who came off the bench as coach Dragan Stojkovic was wary of his captain picking up a yellow card that would have ruled him out of the Portugal clash, drilled his spot-kick into the top corner after Maksim Medvedev handled in the area.

Vlahovic dismissed suggestions that Serbia would be the underdogs when they lock horns with Portugal.

"I don't see why they should be billed as favourites," he told reporters. "The only thing we can do is leave it all out there and play our best game. Qualifying automatically would be a fantastic achievement." 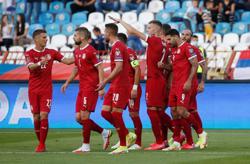 Soccer-All Whites still have work to do, says Hay after World Cup draw
Soccer-Arsenal not willing to entertain offers for Pepe, says Arteta
Soccer-Dortmund's Haaland to return from injury for Wolfsburg trip
KL is in the Malaysia Cup final after 32 years
Soccer-Klopp tells Mane to "pay back with football" if teams target him
Soccer-Battling Angers hold Lens to thrilling 2-2 draw
Soccer-Xavi wants Barcelona to be more daring in attack
Soccer-Beyond pressing, Rangnick will bring United cutting edge experience
Soccer-Italy and Portugal on collision course in World Cup playoffs
Soccer-Pioli signs contract extension at AC Milan until 2023