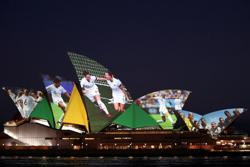 (Reuters) - Australia coach Graham Arnold remains hopeful his Socceroos side will face Saudi Arabia in Sydney in World Cup qualifying next month despite restrictions put in place due to the pandemic.

Arnold and his team are on a record-breaking run in qualifying for next year's World Cup in Qatar having won 11 consecutive matches and face a struggling Japan side at Saitama Stadium on Tuesday evening.

The game will be the 10th in a row the Socceroos have played overseas due to strict quarantining measures that prevent travellers from arriving in Australia without the need to complete 14 days hotel quarantine.

"I really expect that the game will be in Sydney, back in Australia against Saudi Arabia and (we) get some normality back to the national team," Arnold told reporters.

"We've had one World Cup qualifier out of 11 at home, so it's been a great journey so far in terms not only of results, but with what we're doing because everything's different."

Australia last played at home two years ago when Arnold's side cruised to a 5-0 win over Nepal in the second round of qualifying for the World Cup.

Asia's World Cup preliminaries were suspended throughout 2020 due to COVID-19 and since their resumption in June the Socceroos have played in Kuwait, Qatar and Vietnam.

Arnold and his team have been given hope the restrictions will be eased after Football Australia announced the Matildas, the country's women's team, will take on Brazil in Sydney in a double-header on Oct. 23 and 28.

"It's been two years now and it's just the way it is," said Arnold of the situation.

"The most important thing is getting players focused and wherever we play we go out on the pitch with the same mentality, and that mentality is (to have) high energy, great focus and huge belief."