PETALING JAYA: South Korean martial art taekwondo is known for its powerful kicks, so it was no surprise to see Sabah’s centreback Park Tae-su putting that to good use in the Malaysia Cup.

The 32-year-old South Korean centreback showed that he was not only good with his crunching tackles and acrobatic clearances but had a vicious shot in his bag of tricks when he scored against Petaling Jaya City in their Group D match at the Petaling Jaya Stadium on Monday (Sept 27).

From almost 40m out, Tae-su took a stinging freekick that went past PJ City goalkeeper Kalamullah Al-Hafiz and hit the crossbar before entering into the net.

The goal went viral on social media, and world football governing body FIFA also shared a clip of that goal on its Twitter page. 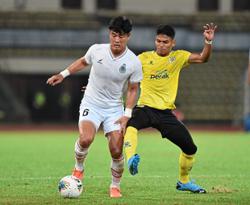