Flying high: Kedah’s Tchetche Kipre has been a real standout for the club in the Super League with 10 goals and 11 assists. — Photo by Kedah Darul Aman FC

PETALING JAYA: One heartbreak is more than enough for Kedah’s Tchetche Kipre.

The 33-year-old striker featured in the Malaysia Cup final in 2018 with Terengganu but it ended in disappointment as they lost 4-1 on penalties to Perak after a thrilling 3-3 deadlock at the Shah Alam Stadium.

This year’s competition starts on Sunday and the Ivorian is determined to erase the painful memory by lifting the trophy in the Cup’s 100th year anniversary.

Kedah, five-time winners, are in Group C with Melaka, Negri Sembilan with either Police or Kelantan United from the Premier League.

“Every team are looking forward to this competition as the Cup celebrate its centennial,” said Kipre.

“Kedah would be in the history books if we can pull it off... so that’s an extra motivation.

“We’ve to stay focused and not underestimate our opponents. In Cup competitions, there will be giant-killers.

“We have seen teams from the lower leagues beating top division sides before, so we must be careful.

“Our coach (Aidil Sharin) has always emphasised on the importance of taking it game by game.

“We did that in the Super League and we’ll do it again in the Malaysia Cup.”

Kedah finished runners-up in the league for the second successive time and will again compete in the AFC Cup.

Kipre was a standout for the Red Eagles with 10 goals and was the best provider in the league with 11 assists.

For someone with a commendable individual statistics, Kipre is not one who likes to thump his chest.

“It’s nice to achieve such things. You may have the goals and the assists, but if your team lose, you haven’t done the job,” added Kipre.

“The first target of qualifying for the AFC Cup spot has been achieved. Now, I want to chase for Malaysia Cup glory to erase my pain and make the team and fans happy.” 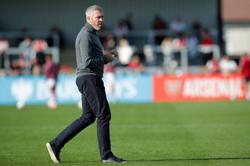