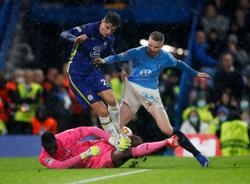 (Reuters) - Chelsea forward Timo Werner is gaining confidence and has shown that he can build a promising partnership with fellow striker Romelu Lukaku, manager Thomas Tuchel said on Tuesday.

While new recruit Lukaku has hit the ground running with four goals early in the season, Werner has yet to open his account after a disappointing 2020-21 campaign in which he scored only six times in the league.

The German forward lost his place in the starting lineup after Lukaku's arrival but has made substitute appearances to partner the Belgian and Tuchel said he could prove his worth when Chelsea host Aston Villa in the League Cup on Wednesday.

"He gave us a clear impression of how dangerous he and Romelu can be together. There was some disappointment from the Euros and the first games, I don't think he was happy with his performances," Tuchel told reporters.

"The stuff that you don't see, in training sessions, he's more relaxed, more fluid in his movements, with more confidence. That's why he came on early against Tottenham, there are clear signs he is in a good way and he can prove it tomorrow.

"Timo was in better positions and we had him in dangerous positions around Romelu. And he got an assist... he moves smart, he's free and his decision making is with more confidence... Hopefully he can push himself and keep that momentum going."

Tuchel said players who have been sparingly used will get minutes against Villa but goalkeeper Edouard Mendy has yet to recover from a hip injury and the German coach hopes he will return for Saturday's big league clash against Manchester City.

"It's a race against the pain and time. We hope he trains on Thursday so he can be back for Saturday," Tuchel said.

Tuchel also reserved special praise for Brazilian defender Thiago Silva, who was named man of the match in Sunday's win over Spurs and turns 37 on Wednesday.

"The approach from him to recovery, to live this life as a professional player is simply outstanding," Tuchel said. "What he eats, when he eats, how he recovers, how he trains -- when he's on the pitch, he trains full on.

"He obviously gets better and better with his experience... The status that he had at Paris (St Germain), to step out of that and enter the hardest competition in Europe shows how competitive he is."