The actions include "terminating the disciplinary proceedings against the undersigning three clubs and removing the penalties and restrictions imposed on the remaining nine founding clubs for them to avoid UEFA's disciplinary action."

Earlier this month, a Spanish court had ordered European soccer's governing body UEFA to cancel all legal sanctions imposed on Real Madrid, Barcelona and Juventus for planning the creation of the breakaway European Super League.

(Reporting by Rohith Nair in Bengaluru; Editing by Louise Heavens) 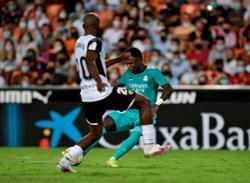