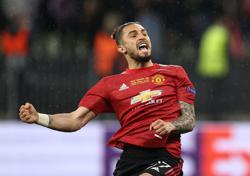 (Reuters) - Manchester United have cancelled their pre-season friendly at Preston North End on Saturday after a small number of suspected positive COVID-19 cases at the club, the Premier League side said on Thursday.

United drew 2-2 with Brentford on Wednesday and detected the cases following routine testing of the team.

The game was called off as a precautionary measure based on COVID protocols, United said, with identified individuals now isolating pending further tests.

"At this stage, we do not expect further disruption around our forthcoming matches, but we will continue to follow Premier League protocols in this regard," the club added.

United only remaining pre-season friendly is against Everton at Old Trafford Aug. 7, a week before they host Leeds United in their Premier League season opener.